All Rivers Lead to the Ocean 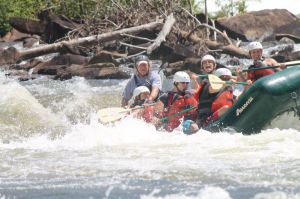 I’ve spent a lot of time whitewater rafting on the Ocoee River with my sister. We’ve also spent quite a bit of time swimming in practically every pool from here in Nashville to Kentucky’s Beech Bend with the girls this summer. My five year old passed the Y’s swim test this year without ever having taken a single swimming lesson: that’s how much we’ve been in the water. Water is our friend. And one of our favorite places is Long Hunter State Park, not far from where we live. This park has a lake in which we wade, and throw rocks and stare at. It is very peaceful. In fact, water just in general is very relaxing. Once every two weeks, I allow myself a twenty minute soak in a bubbly garden tub, simply because it helps ease my mind and quiet my heart. Perhaps that is why last night’s episode sparked thoughts of the ocean—there is no better place at which to feel the calming effects of water.

Yesterday was not a terrible day. In fact, it wasn’t even really all that bad. Nothing truly out of the ordinary happened. And yet, at the end of the day, when all was finally quiet, I sat down at the computer to write. I wanted to write another hopeful, inspiring, optimistic sort of post—-but all I felt was drained and restless. So I walked outside, laid on the grass before coming back in only to lie on the sofa. I pulled a blanket I keep near the couch over me and closed my eyes—not to sleep but more to just block out thoughts; it was an attempt to rest. Instead, tears soon stung the back of my eyelids. Now, I’m not one of those people who never cry; I cry. But I know how to do so unobtrusively. I know how to control it, and how to stop it when I don’t want to. If you breathe right, you can swallow back the tears. It’s true, it can be done. Mostly, when I feel the sting of tears, I deliberately start breathing in a more controlled way. Slow breaths in combined simultaneously with a few quick blinks, and tears will go away. Even when I do allow them to fall, I almost never give them free reign: I’ll allow them to roll down my cheeks, but I’m quick to wipe them away. You might ask why. Let’s just say I learned how to control crying as a child so well that I have been sharing a bed, crying, while the awake person beside me did not know I was in tears. I allow myself a few tears when I can’t verbally acknowledge or explain my emotions but only for a minute or two, and then I dry them. Quickly. Deep inside, I fear crying is selfish because it causes others to spend time and energy on me—it interrupts the flow of their day. You see, most of my life has been centered on figuring out what those around me need from me and then doing it. In fact, ironically, I don’t cry very much when bad things happen (I don’t have time: I have to avert or repair a crisis) but will often feel the sting of tears as soon as someone does something nice to or for me. A telephone call, a hug, a conversation and I’m good as gone. Maybe because I don’t expect kindness and that leaves me ill prepared for knowing what to do with it.

So, anyway, the tears that stung my eyes last night weren’t all that uncommon. What was different, though, was that I didn’t stop them. I didn’t even try. Instead, it was as if a dam burst. The girls were asleep; I was alone. In other words, crying was safe. And they just spilled out, one after the other, unstoppable. My shoulders shook and every time I started to control it, a different loss or challenge or thought would pop into my brain and ignite a hundred more tears. I was just so tired. Tired of so many things and emotions. I’m usually so busy cultivating a spirit of optimism and hope in our lives that I sometimes forget to really grieve. This past year has been one of the hardest of my life, with so many challenges, yet I have only really broken down once, alone, after a devastatingly traumatizing loss left me scared and aching. Last night, though, I cried for a good three or four minutes. Really cried, even letting my shoulders shake and a few sounds of grief escape my throat. I cried because not crying for so long had left me feeling a little empty. I cried for all that’s been lost, both physically and emotionally. It is really hard for me to give myself permission to do much of anything but that’s what I did last night: allowed myself to cry. I didn’t even really know why I was crying and that was okay. I didn’t have any idea what prompted the tears but I didn’t really care. I probably would have cried longer except that, as I buried my soaked face in the blanket and made an attempt to dry my eyes, a thought rolled into my brain: all rivers land in the ocean. I had no idea from whence that thought came but it acted like a mental stop sign, interrupting my otherwise dreary train of thought.

What was rolling down my face were salty tears, enough probably to make a small puddle. That imagery sparked a mental picture of water rolling. Soon, I was imagining a river that started somewhere in the high country and was flowing toward the ocean. Streams pick up small rocks and break them, did you know that? The rocks get smaller and smaller, eventually becoming small bits of sediment. Streams and rivers change the surface of the earth more than any other catastrophic event like earthquakes. They make the land surrounding them smoother, but it takes a long time to do this. The goal of a river is to make a flat surface where it can flow freely to the nearest delta (ocean, bay or lake). Bear with me for a minute while I think about this. There can be boulders in the way. There can be big rocks. There can be sediment. There can be lots of challenges. But the fast moving water of a river in the high country doesn’t care—it moves and flattens them.

I cried lots of them last night. My heart hurt and ached. I wallowed in the grief and the pain and it all came out as little salty tears rolling relentlessly down my face. But, eventually, the tears slowed. Then they stopped. The internal chaos and upheaval I felt while crying calmed. And what I was left with was quiet. My thoughts returned to my children. I opened my eyes and saw the leather books in which I write the girls a letter every month: I should do that now, I thought. The last few minutes spent in tears hadn’t really changed anything in my world—and yet, in a very subtle way, it had. It had broken through all the debris lying in the way of my energy. It had broken through all the rubble lying in the way of peace. I was suddenly capable again of writing those letters. And doing the dishes wasn’t so awful a thought either. A tiny shiver of the optimism I hadn’t felt earlier was shining right in my eyes again. I wasn’t overwhelmed anymore, I wasn’t so drained, and I didn’t feel so void either. When the river water mixes with the ocean, its journey ends, it slows its steady pace, it becomes part of the ocean itself. And what is the ocean?
Truly awesome. Inspiring. Calm. Peaceful. Soothing. Its water is cool and refreshing. New animals are born every day in its depths so it’s kind home to a whole host of new beginnings. Animals die every day within its depths, too, so it’s also a resting place. There are shells in it and pearls and other natural treasures. There are sunken ships and crashed airplanes; it’s full of fascinating, terrifying and beautiful stories. Have you ever sat on the sand with your toes in the water and closed your eyes? Have you ever smelled, really smelled, the salty air there? The ocean is massive—-the deepest part of it is the Mariana Trench, which lies in the Pacific Ocean between Japan and the Philippines and is 35,840 feet deep. According to the NOAA, ocean water covers more than 71% of the earth’s surface, contains 97% of the planet’s water and yet 95% of the underwater environment remains unexplored. There’s no way you can look at the ocean and not feel small. And that’s because we are small. But that’s a good thing. You see, the ocean gives me hope. The ocean reminds me that, even when there are huge rocks to break apart, life moves on. In the grand scheme of things, none of my problems are really all that big. It isn’t supposed to be about perfection—there are millions of animals living right now in the oceans with damaged fins. They’re handicapped, but they’re still living, still swimming. No matter what I lose, no matter how many obstacles I might face, the truth is that, in the end, peace reigns. I’m reminded of what it’s like to be 10,000 feet in the air, looking out an airplane’s window at the tiny ground. I’m reminded of how small it really is. I can get so caught up in fear that I essentially paralyze myself. I can also get so caught up in remaining “strong” that I forget to feel. Eventually, all problems resolve themselves. While time doesn’t necessarily heal all things, it does change perspectives and offer new friends, new experiences, new chapters. No matter how earth-shattering a loss, eventually, I wake up one morning, breathe in, and think to myself: “Okay. Today’s the day I’m going to get out of this house again.” No matter how horrific a crisis I may experience, someone else is, at the exact same moment, experiencing something amazing and miraculous. Tomorrow might be my day for an amazing day, and theirs for a crisis. Eventually, both our journeys will end in the ocean and we’ll be given the opportunity to experience lasting peace, security and hope. 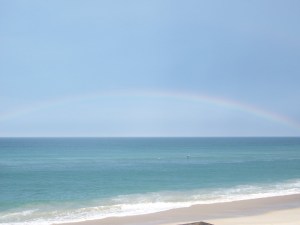 Tears are a necessary part of life. We can’t properly grieve, or move on, until we first acknowledge the pain. Tears are a way of reminding us that superheroes aren’t real; we’re not endowed with superhuman strength or powers. We hurt. We get tired. We miss people and things which have been lost. We can bottle it all up but the cost of doing so is our sense of hope and optimism. I used to feel guilty for crying. Sometimes, admittedly, I still do. But tears are just a small stream. They’ll soon meet up with a river, which will soon meet up at the delta and flow into the ocean. All I have to do is keep my head lifted with the assurance of a new day, my eyes focused on the rising sun and my heart ready to laugh or cry as it will.

← Do You Hear The Ocean? Thankful Tuesday: Friends →