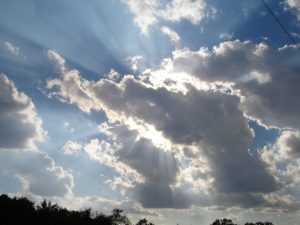 About a week or so ago, the girls and I went to the park. We hadn’t been there long when we saw a man with two children. One was a little girl about Alight’s age–she was riding atop the man’s shoulders. The other was a little boy about Breathe’s age–he was walking alongside the man and he carried a child sized fishing pole. A tack box hung from one of the man’s hands. They walked along the grassy path toward the water, paying no attention to the other patrons of the park. I wasn’t close enough to hear their conversation but it was obvious that both children were enjoying a great day fishing. I wondered if this was the first time the man had taken them fishing or if this was a semi-regular weekend activity. Whichever it was, it was a sight straight out of an old Andy Griffith show and seeing it shattered my heart into a thousand pieces. All the gaiety I’d felt that day dissiapted under the weight of memory; it was as if a fire seemed to ignite, burning the edges of an already raw wound. For the space of two or three heartbeats, I felt exposed and vulnerable. I returned to playing with my own children but my mind’s eye had captured an image it wouldn’t let me forget. That night, after the girls were asleep, I wrote the following letter but so personal was it that I found I could not post it. Until now.

Today I saw a father with his two children.  He was taking them fishing. He carried the little girl on his shoulders. Even though I understand that I can’t tell for sure just by today’s sighting of him but he seemed like a good father: the children looked happy, and he looked happy. I watched them for about a minute. I started shaking on the inside and I could feel my face flush. I don’t know why. I mean, the girls and I go out in the community practically every other day and we see men with children frequently. Just not in such an Andy Griffith-type scene. Usually, the fathers I see are watching from the sidelines or in the midst of reprimanding a child or on the phone—they just don’t usually seem actively engaged. There are basketball goals set up in driveways all around our neighborhood, for instance, but I have yet to see a dad shoot baskets with a son on a Saturday afternoon. Mostly, it’s easy to scan over the activities of the stranger dads and moms we see. But not this one. This one made me ache, Abba.

I love You. And I know I’m not supposed to dwell on what I cannot change. Remembering what is lost for no reason but to remember it does no good. I also know that You have worked overtime to compensate…. You were there. You held my hand. You’ve drawn near every time I’ve asked You to, even when I didn’t deserve it. You granted me an infinite number of truly awe-inspiring and beautiful things. Butterflies. Children’s laughter. Big, hairy dogs. Trees. Mama, Mandi, Breathe and Alight. Writing. Music. Stackhouse. These are all precious gemstones, diamonds You carved into the framework of my life for me to find and appreciate. The best dad on the planet can’t compare to You–You’re the only one who never leaves, You’re the only one who truly understands, You’re the only one whose thoughts of me are sweet and numerous. Complaining won’t fill my heart, it won’t bring back the innocence that was lost. I know all that. And I am thankful.

Tonight, I find myself aching to have been that little girl for just one day. I find myself missing things I have never known–the strength of an earthly father, the comfort and security that comes from knowing someone stronger than me has me protected, the sheer joy of knowing that a father might care more about me than about money, manipulation or games. I’m not angry or bitter or even resentful—-it’s just that there’s a hole in my heart, a very wide and raw hole. Sometimes I forget it’s there, sometimes I think I’ve managed to fill it up—but I can’t Photoshop my memories, I can’t make something out of nothing, the disk is full of nightmares and degradation that I don’t know how to erase. I don’t even really want to, as they formed much of who I am.

What does a real father’s hug feel like? What does it sound like, to hear a real father read to you? When those children I saw today grow up and look back at pictures with them and their dad—what will it feel like for them to look at pictures of their dad while still feeling safe? How does a father’s strength teach –good– things? What would it feel like to see the approaching Father’s Day holiday with as much anticipation as I view Mother’s Day? What if the question “Is it easier to identify three good things about your mother or your father” was impossible to answer? How much easier is it for women who grew up with engaged dads to trust? What would it be like to believe that a man’s superior physical strength was there FOR me instead of against me? Sigmund Freud once said, “The greatest childhood need is a father’s protection.” Is that because mothers are inherent nurturers? Helping Dad wash the car on Sundays, or seeing him at the book signing table in one of the stores, not have to worry about who would walk me down the aisle…. feeling wanted and needed and important to two parents rather than one– is that a warm feeling, a light feeling or one that just gets taken for granted by those fortunate few who experience it? You gave me Mama, a wonderful mother who not only supported my dreams whole-heartedly but continues to act as the wind beneath my wings, the behind-the-scenes encourager and motivator. She’s been a constant source of love and belief, and nothing could take her place. What if she were doubled? Who would I be, Abba, if those nightmares had never been reality, if I had never known that pain? Who would I be, Abba, if I hadn’t been made to believe that the only way to be loved and accepted is to be perfect?

You were here when my first book sold—did You smile, was the warmth of pride in Mama’s eyes reflected in Yours, as well? I hope so–after all, You were the one who gave me the gift of writing; you are the one to whom the credit is due. I wish I could have seen Your face then. I wish I’d been the kid who’s dad wanted to take her to a sock hop or waited up with Mama for me to get home from my first date. As much as I know Your love is more than all that combined—it’s hard not to feel isolated and unwanted. As much as I know Your love and acceptance is the ultimate comfort (holding Your hand was a defining moment in my life), I mourn for the little girl Tiffini who had no idea fathers like Michael Landon on “Little House on the Praire” or the man I saw today weren’t just characters from my imagination. I hurt for the little girl Tiffini who was made to believe that she was good only for their physical pleasure–that she had only one use for them. I ache for the emptiness that fills the heart when others’ talk about the assorted memories of their fathers. Though it sounds crazy, I miss what I never had.

Tonight, I’m clinging to Your promises not because I need a favor; I’m not asking to go back in time or to hit some sort of Delete key on my memory harddrive. I’m not even asking to forget. But I do have a need. You see, I can’t call my earthly father “Daddy” without feeling like it’s some sort of tainted or bad word. The sound of that word in connection with my father feels… well, like a lie, since he never was a real dad. I don’t understand why some children are protected and others aren’t. I don’t understand why some children are given the gift of loving the word “Daddy” and others… well… aren’t. I don’t know why some children see visions of nightmares, and others don’t. What I do know, though, is that all children are the same—all children have a piece of their hearts that are reserved for that one person, the one who longs for and deserves the name “Daddy.”

Picture from Google Images under “free image”; found on wetcanvas